Lead Flashing’s, loose pots, leaks, bricks, capping or removing we can price for them all.

Pointing of the chimney stack entails

The pointing is the finished cement between brick courses on a wall or chimney. The costs to re point a chimney or wall will ultimately depend on the size of the wall/chimney stack and the height/access. If the pointing is left to decay and crumble over time, this can lead to penetrating damp and ultimately expensive structural problems, so it is best to get any re pointing done as soon as possible to avoid further expense down the line. 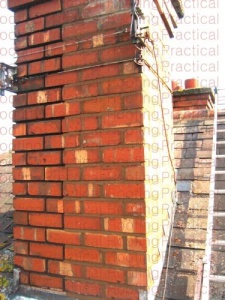 If you are considering having your chimney re bpointed, you probably have a leak and are hoping that re pointing will solve the problem. However, you should also inspect (and replace if necessary) the chimney pot and flaunching, the lead around the chimney base and tiles around the chimney and under the flashing. If you need scaffold erecting to do the pointing (most houses will), it may be worth considering any other jobs which may need doing in the near future which could make use of the scaffold such as any fascia, soffit or guttering work.

The most difficult part of re pointing a chimney is gaining safe access to the chimney and working at height. This will almost always involve hiring a scaffold company to provide safe access. Once you have access you should also inspect the flaunching on top of the chimney and remove/replace if in poor condition. Then the old pointing should be raked out and any loose dust removed with a brush. Do not be tempted to just have a thin layer of cement applied over the top of the old pointing, this is a false economy and will not last, peeling off after just a few months.

What removing a chimney stack entails

When people talk about removing a chimney, they are generally referring to a chimney stack rather than the complete chimney. The chimney stack is the part of the chimney that sticks up above the roof. Therefore, a quote for chimney removal does not normally include removing the chimney breast or the hearth (if you do wish to remove the entire chimney the costs would be considerably higher). In this article we are simply considering the removal of the chimney above the roof line and then tiling the roof over. 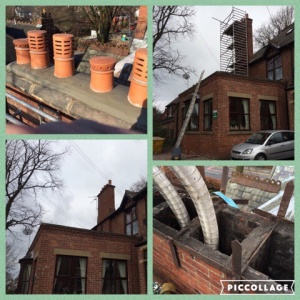 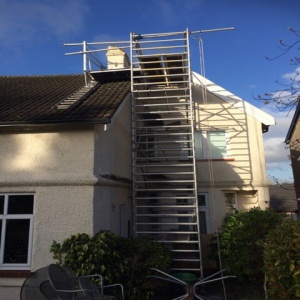 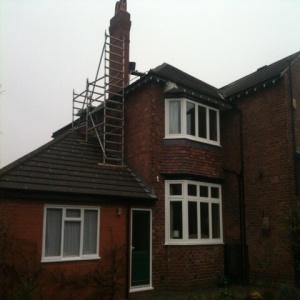 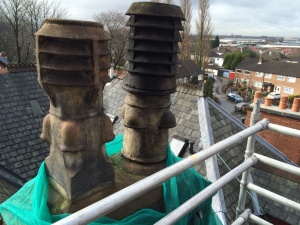 Any additional work over and above this would need a separate quote. The most common reason to remove a chimney stack is if the chimney is in a state of disrepair, as often it will cost more to repair than it would to simply remove it. In addition, the need for chimneys has reduced significantly thanks to the prevalence of gas central heating.

While you have scaffold erected for roof access, it makes sense to have any other roofing work carried out, so any roof tiles that need replacing or repairs to the fascia/roof line could be carried out at a reduced cost. At the very least have your roof inspected and checked for any damage at the same time.

A typical chimney stack removal job would mean the hiring of scaffold, the removal of all cement flaunching and chimney cowls/pots, dismantling and removal of all bricks to the ground, then the supply and install of new roofing felt, timber and roofing tiles. Finally, the disposal of all waste material will be required, which may involve skip hire if the chimney stack is large. Depending on the age and design of your chimney, you may be able to sell some of the items such as clay chimney cowls and pots can to a reclaim yard or roofer’s merchants.

Removing a chimney stack is not normally a DIY job, there is much to go wrong with this task and damage can easily be caused to the roof structure which can be dangerous and potentially cost a lot of money to put right. A bodged chimney stack removal can cause ventilation and condensation problems along with actual structural problems. Working without a scaffold tower can be extremely dangerous so if considering DIY at least ensure you follow safety precautions. A scaffold tower will typically cost around £300.

Cost of having a Chimney Stack Removed

The average cost for chimney stack removal is usually in the range of £900-£1200 depending upon the size of the chimney and whether or not scaffolding will be needed.

Roofers normally work in pairs and charge around £320 per day. Removing a chimney stack shouldn’t take much longer than a day and if it’s a small-medium sized chimney, two roofers should be able to complete the job in half a day.